Maria Broberg (born 1977), debuted in the spring of 2020 with her critically acclaimed novel, Bakvatten. Brought up in Piteå, she has spent the last 10 years in the tiny village of Nedre Saxnäs, near Sorsele. Today, she is active in public relations, as a writer and as a local politician focusing on democracy and rural development in sparsely populated areas.

Maria Broberg (born 1977), was brought up in Piteå but she has spent the last 10 years in Nedre Saxnäs, near Sorsele. This tiny village, together with her family inspired her to write her critically acclaimed novel, Bakvatten (2020).

She has previoulsy lived and worked in both Umeå and Stockholm as a qualified arts journalist. She has also written about music and worked as a litterature critic. At the turn of the millenium she was one of Sweden’s first female music bloggers and contributed three essays in the anthology Digfi: Mix (2005). Maria Broberg has also published chronicles, essays and opinion pieces.

The photographer’s name must always be shown. The pictures are also available on  the webpage of Norstedts publishing house. May only be used in connection with material about the current book. 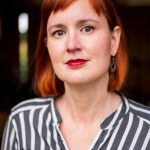 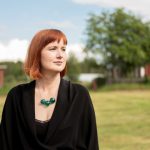 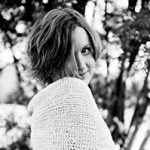 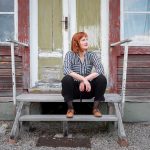 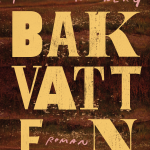 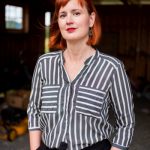